Guide to nutrition during cancer treatment

With the editorial support of Antes de Partir “A path of love and life”, the first “Nutrition Manual for Cancer Patients” by Dr. Julia Salinas Dücker and Michelle Brunel Couttolenc comes to light.

Cancer is a disease that evolves rapidly, deteriorating the patient's vital functions, which prevents the use of food and its nutrients. With this in mind, Dr. Julia Salinas Dücker offers to reduce eating problems caused by surgery, radiotherapy and chemotherapy, making clear and simple nutrition recommendations after the end of treatment.

Nutrition is a very important part of cancer treatment since eating the right foods before, during, and after treatment will help you feel better and stay strong and in good spirits. Not everyone has eating-related side effects, but this guide will help if that's the case.

Nutrition During Cancer Treatment is a guide for patients and their families that is not intended to replace or offer professional medical advice to individual patients. All decisions and health instructions must be made with the specialist. Nutrition Manual for Cancer Patients has been prepared with the best intention of supporting the nutrition of cancer patients, which hopes to become a permanent reference text for this and their families.

Support for people with cancer, for a better quality of life

"Illness isn´t a death sentence, but an invitation to live"

After a hard experience, Mariana decided to dedicate her life to caring for and caring for others: people with terminal illnesses. Her work, despite being hard, exhausting and emotionally difficult, has given her one of the greatest lessons: learning to live.

An invitation for life

The most terrifying diseases are those that seem not only lethal but dehumanizing, in a literal sense," wrote Susan Sontag in her book The Disease and Its Metaphors. The Mexican health system, through a chain of deficiencies, denied the more than 214 thousand people who died last year of chronic diseases - such as cancer, HIV, diabetes or heart disease - access to palliative care. And that pain to which they were sentenced is a form of dehumanization.

Pain is estimated to be the main symptom in 40% of cancer patients under treatment and 75% in advanced disease. Although its presence depends on the type of disease, pain relief, through palliative care, is a priority in the world cancer program of the World Health Organization (WHO), insisting that health systems put in place launches pain control surveillance programs.

The implementation of palliative care not only alleviates pain in the patient, but also reduces the costs of the health system, since it prevents a large number of emergency hospitalizations of patients. According to the aforementioned HRW report, there is a problem in the training of medical students towards palliative care:

From the trenches of civil society, various organizations, such as Before leaving, work in specialized care for people with cancer, with the aim of improving their quality of life.

Mariana Hernández, president and founder of Before Leaving, after losing her brother, realized that there was no association to accompany both the sick and their relatives in the process of their illness.

Public accountant by profession, graduated from ITAM, Mariana never imagined being in charge of a Civil Association.

Life, he says, put her on this path.

“My mother and I were the primary caregivers for my brother, who unfortunately passed away young from cancer. After our period of mourning, my mother and I took on the task of founding the organization with a multidisciplinary approach, which also cared for the primary caregiver, who –sometimes– dies before the person with a terminal illness, due to the burden and stress. ”

Thus the association was born in 2014.

The process of all illness, he says, is temporary. "We tell family members that whatever the end, health or significance, they can live the process in a better way and that is their decision." The philosophy of Before Leaving, its focus of attention is centered on a postulate:

"The disease is not a death sentence, but an invitation to life."

How to resignify life for people who are going though a situation like this?

Nothing is written. We don't know the day we are going to die. A cancer patient or a child with a terminal illness is no closer or farther from death than we are. When a mother understands that, they abandon the fear of death and then begin to enjoy their children. From there they resignify death; that is, they focus on what they have, they don't waste time and they focus on enjoying their children, on being happy.

Tell us about Before you Leave programs?

One of our strong programs is called “With You by the Hand,” which consists of psychological and thanatological care for patients in hospitals. We have an agreement with two hospitals, the Siglo XXI National Medical Center, in Oncology and the Specialty Hospital, in the case of adults. And in the case of children, two pediatric hospitals, Federico Gómez and Moctezuma.

In all hospitals we go with a team of trained therapists to care directly at bedside with patients or in the playroom area with children. In this case, the stage of the disease does not matter.

Another of our programs specifically cares for patients who do not respond to treatment, who have a life expectancy of less than six months. That program is called "At the time of departure we are with you." And what we do is support the patient in the process through the home link; that is, we go to their home with a multidisciplinary team, in order to meet the needs in the sphere of health, psychological and spiritual.

What obstacles do they face in the process?

There is a barrier that is the barrier of death. There is a mistaken belief that, as the Mexican celebrates death, he accepts it better than people of other nationalities. It is not like this. Mexicans are not willing to open the dialogue or even imagine that this is a process that we are all going to have to go through. More than the family, it is a cultural issue, because when we come to offer our services, due to our name, we face a natural, immediate rejection. But when family members reason better, they give us the opportunity to learn about our philosophy, they enter into confidence. Abandoning curative treatment does not exclude the possibility of palliative treatment. This will make the child, young person or adult, terminally ill, have a better quality of life.

Tell us a story related to your work, something that has moved you?

Patients are our great teachers. Many times we think that we are going to help them and it is the other way around: you would be surprised to see how resilient they are. I have an anecdote tattooed on my soul. And every time I lose my strength, because this work is absorbing, in addition to being in contact with so much suffering, I go to it. He was a child whom I had the honor of accompanying on his way. He suffered from brain cancer and, gradually, as the months went by, it began to deteriorate. He went from walking to depending on a wheelchair; from breathing well to bringing an oxygen tank, and from playing and doing things on your own to totally depending on someone else, even to go to the bathroom.

The last time he shook hands with me and said: “Mariana, I think I already understood what life is about. ‘Let's see what it is about, Raúl?’, I replied.’’ Yes, look, he said, cancer has taken many things from me: eating alone, playing soccer and walking, but the only thing that has not taken away from me is the ability to love.’’ That day we said goodbye, we hugged each other and a day later I found out that he had passed away.

¿How do you manage not to become terribly sad, to not fall into a depression?

I think that for me it is a mission, and not only that, but a vocation. I live the process closely with my patients, as I actively get involved in home care. I see life from another angle, with the eyes of others: my patients. And that changes everything: I do not see short lives or long lives, but people who have lived their time and that the important thing is to know how to make the most of it. Patients teach and remind me every minute that you have to live life, forgive today, love today, play today, smile today and never stop being children. I love that wonder in children that adults easily lose.

Would you go back to accountancy?

No, I believe that accounting is the basis for where I am today, it serves me. I am very grateful for what I have done during my professional career, but since I founded the association, I discovered my mission in life and, of course, I am 100% committed to it.

Death and the Duck

Death, a faithful companion from birth, patient, tolerant, silent and wise teacher, who throughout our lives gives us just time and multiple opportunities for love, heartbreak, joy, sadness, anger, frustration, to learn and unlearn, to become attached and detached, both from our loved ones and friends and material objects, to finally detach ourselves from our life and die in peace and calm, understanding that, when dying, those who remain will no longer matter, since they are not part of our life, because we have died for the world, nor are we part of theirs, since we are no longer for them.

This short, but beautiful and wise story, allows us to see the above and in a simple way, lead us to reflect on something so natural, historical and proper to us, non-transferable, non-negotiable, non-advance, non-postponable, but what day by day , shows us with the death of others, that he is as close to us as our clothes are to our skin, and that despite the tendency of our current society to hide and deny it, he will always come back to remind us until he realizes us .

For you, who has lost a child

We dedicate this book to you, someone who has lost a child. Just to help you dream, feel and think. 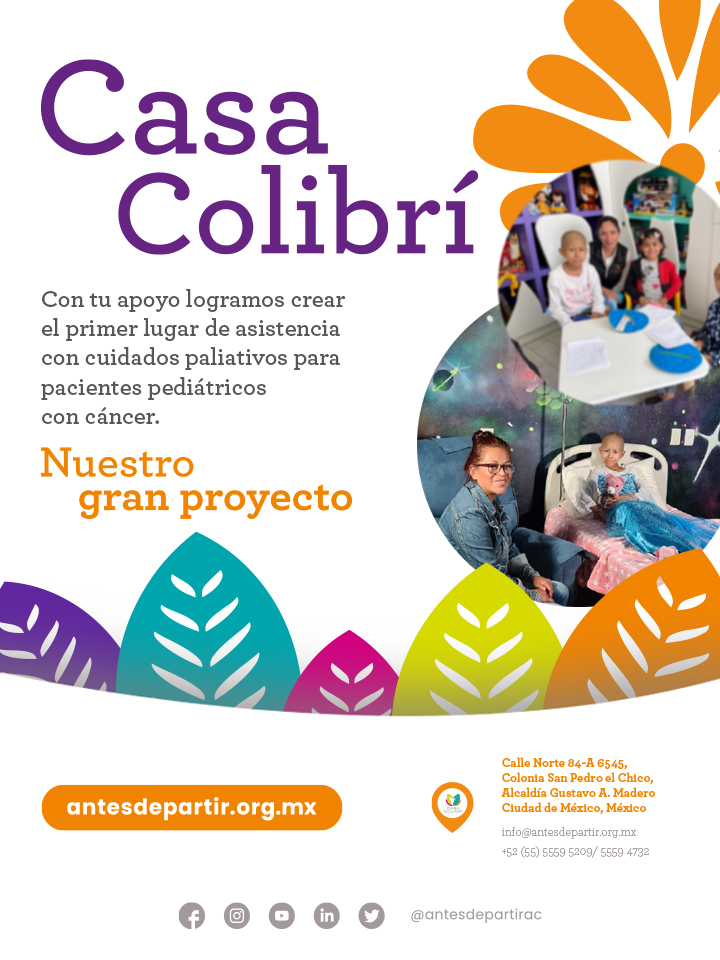